From a young age I’ve always been interested in football. I think it stemmed from primary school when the boys would let the girls join in matches during break times. More often than not, we'd be put in goal as there would be 3 or 4 girls stood inbetween two scrunched up jumpers as goalposts on the concrete playground. We also had a couple of sessions with Wigan Athletic and MUFC who came to coach us and that’s where I learnt to play football properly.

At the time none of the big teams or any club I knew of had any form of women’s team, so it only really seemed logical to follow the mens teams. It’s only been up until the last 5 years that women’s football really started to make waves on the big stage, gaining television coverage, a bigger following and more exposure. I’ve been keeping an eye on where and when the England games (and club games) have been aired, starting off mostly on BBC Three, then slowly creeping onto the terrestrial channels such as BBC Two and One.

This week I caught the TV spot from Channel Four advertising the Euro 2017 tournament, which I’m very happy about as they do a great job of supporting unconventional coverage particularly for the paralympics giving it the coverage they deserve. This ad simply shows a young girl with plenty of skill, walking home from school playing keepy-up with a number of round objects, which for those girls who have grown up aspiring to play can easily relate to, although I think my record may only be ten. Watch it here.

What caught my eye the most in the build up to the women’s Euros this summer, was the crest change from the host nation, the Netherlands. 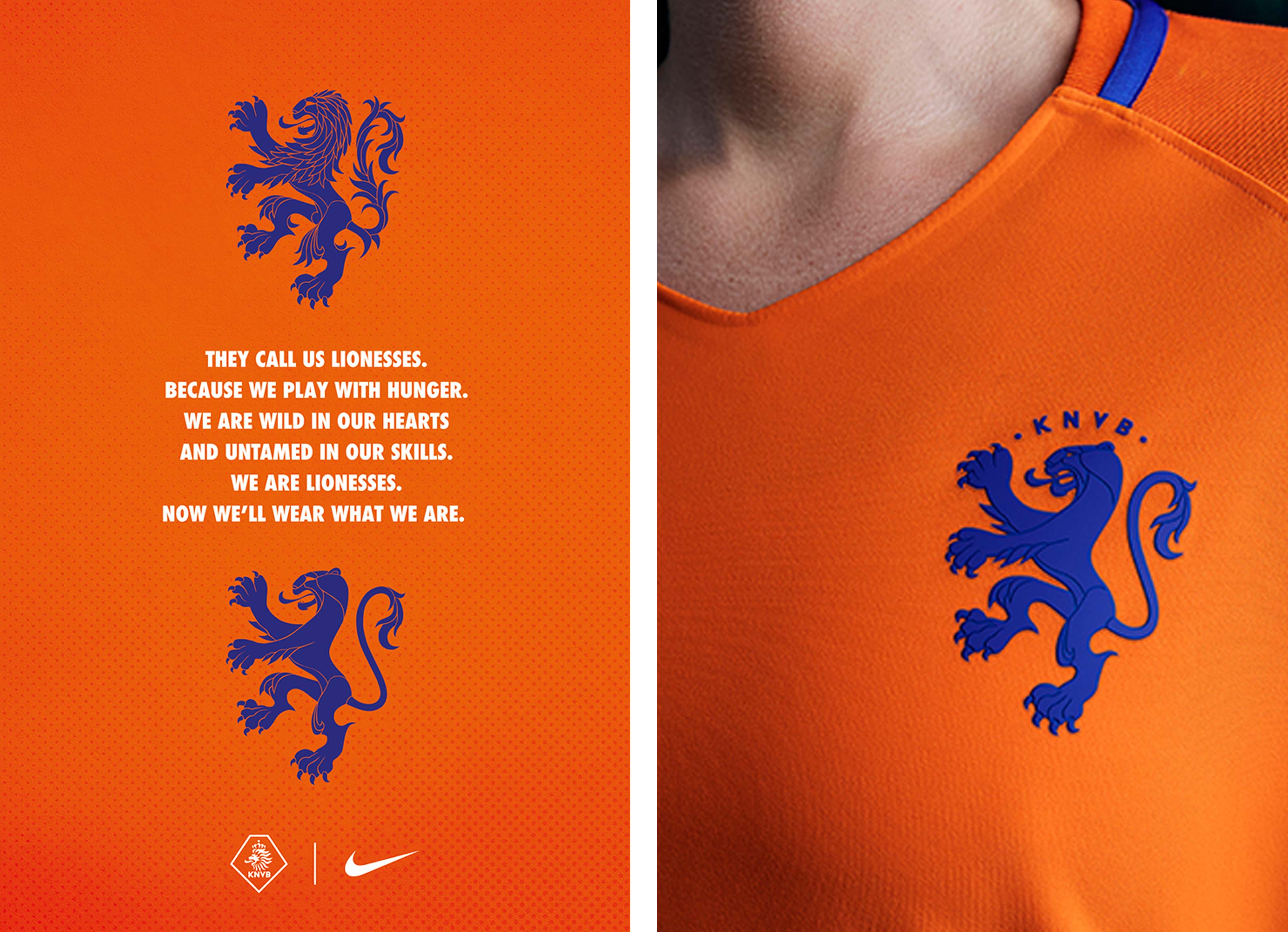 Wieden+Kennedy Amsterdam alongside the Royal Dutch Football Association (KNVB) have adapted the mens crest to fit more suitably to their women’s national team. It’s so much more than just a graphical change and signals a bigger movement for their female team, amplifying the support by giving them their own identity which is separate to the mens team. The England team have also naturally gone for the lionesses route, but I do feel this statement from the Netherlands is much bolder and bigger, igniting a much needed spark the female game needs to be taken seriously.

Back to focusing on the English team, whilst working at Absolute I have had the pleasure of getting to meet a large portion of the Manchester City team during kit launches (significantly the 2016/17 kit, as this was a strip specifically tailored to both female and male body types) and not to forget the Christmas campaign last year. What I found interesting with both these projects was that although it was good to meet the big names from the mens team that we hear about all the time, it was the likes of Steph Houghton, Toni Duggan and Izzy Christiansen that I was looking forward to seeing the most. Steph in particular has played a huge part in raising the awareness of the game captaining the winning Arsenal and MCFC sides and hopefully the English side this summer. It’s a really exciting time to witness the change of perceptions on the whole for the female game, allowing it to be taken more seriously. Alongside the profile of the players increasing the campaign for the lionesses this summer has been met with high profile celebrity endorsements from Little Mix getting behind the team for the Salute video. Watch it here.

I still have the passion for the game and even dragged my better half to the shops last year to buy a football for the garden, which I will no doubt be kicking about during the tournament, taking me back to those days when I thought I could play for a proper team! I’ve learnt now I’m better off leaving it to the pros!